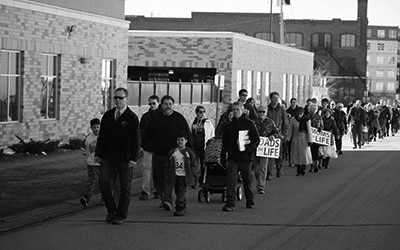 Our Jericho March is done to mimic the biblical battle of Jericho (found in Joshua chapter 6).  God told Joshua to lead the Israelites in a march around Jericho for seven days. On the seventh day, the walls of Jericho crumbled.

Join us for a modern day Jericho March around the highest volume abortion facility in the Midwest: Planned Parenthood. Over 6,000 babies are killed here each year! We will begin by marching around the block in silence once a day for six days. The seventh day, we will march around Planned Parenthood six times in silence and on the seventh time, we will make a lot of noise! While we don’t expect the walls of Planned Parenthood to crumble literally, we do pray that hardened hearts will crumble because of our witness and our prayers to God for an end to abortion.

We pray you will join us for our next Jericho March! If you have questions, please contact at brian.walker@plam.org or call 651-797-6363. The Jericho March is part of our Lenten 40 Days for Life.

“By faith the walls of Jericho fell, after the army had marched around them for seven days.” ~ Hebrews 11:30